Oh, look, we bought a house! (And I became super stressed out) 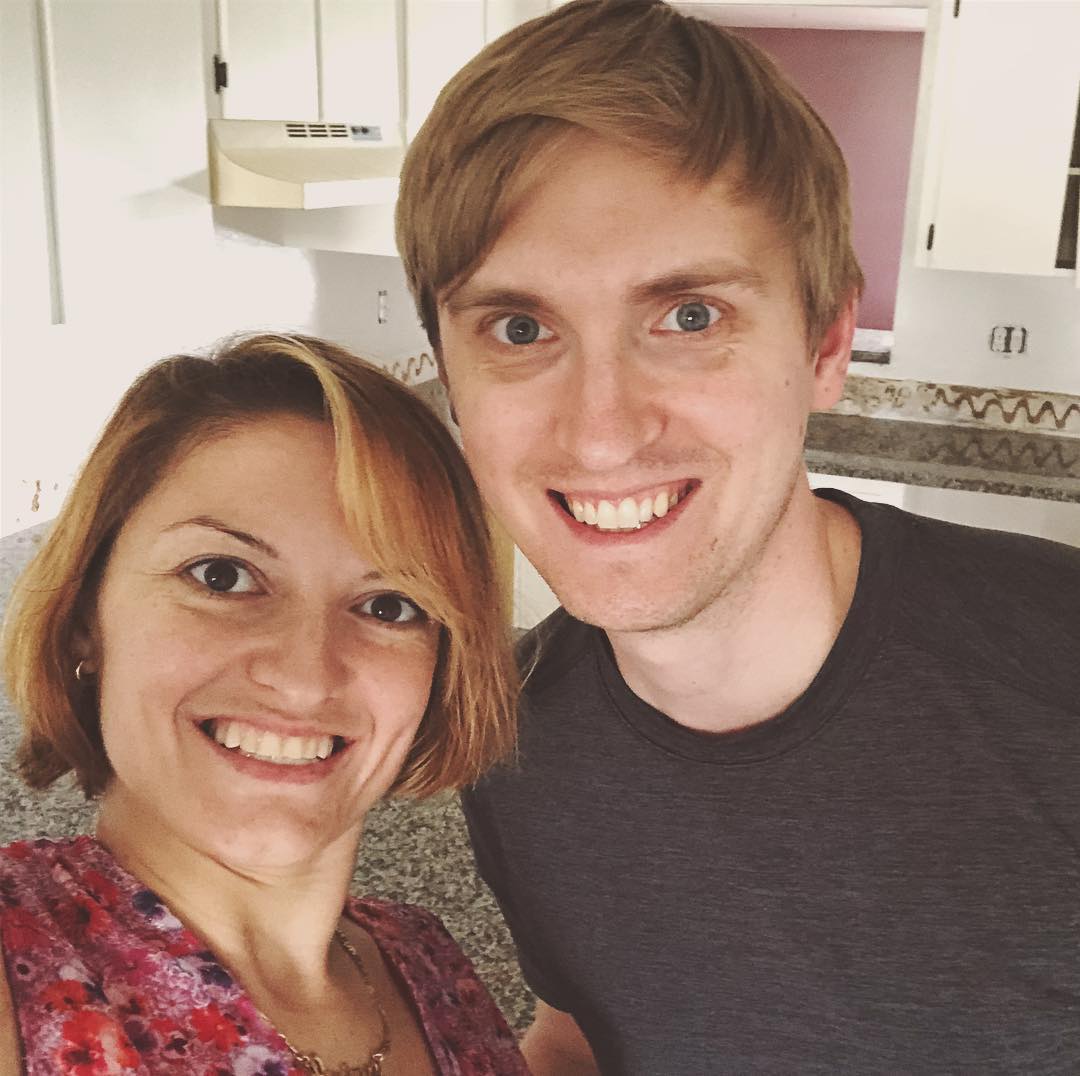 It’s currently 5:40am on Thursday, August 16th, and I have been up since somewhere around 3 in the morning. This week has been terrible for my sleep and so, at the encouragement of my ever-loving, exceedingly patient, totally supportive husband Adam, I decided it was time to write about it.

There’s only one problem: My writing brain is barely working lately.

I hate to be one of those people that complains about all the crap going on in my life but, give me a minute, because I am going to do that anyway. You see, I had shoulder surgery back in mid-April after my 15th shoulder dislocation… and then in mid-May, Adam and I bought a house.

A house! How crazy.

To be honest, I never really seriously thought about buying a house. Before moving to Florida in order to focus on my recovery and become a full-time freelancer, I was happily living in NYC and thought I would live there forever. In fact, I spent 12 years there until I realized that my mental health was suffering and I needed a change of pace.

But having lived in New York for so long, owning a house was never something that I thought was possible, doable, or even something to strive for. In fact, most of my city friends (many of whom are still there, others who have moved to L.A. or other parts of the country) do not own property nor do they aspire to. It’s just not something that was ever in our general consciousness, and so I basically thought I would spend the rest of my life living in apartment even though my parents are, in fact, real estate owners/investors/businesspeople. That’s their job but I still just didn’t see that for myself.

And then I moved to Florida and met the love of my life and we got married last December… But still, owning a house was something on our “maybe” list when we talked about the future. It just didn’t seem possible considering that we loved to travel and neither one of us is good at saving money. I mean, seriously, we don’t even have an emergency fund and you expect us to save up for a 20% downpayment? I don’t think so.

An opportunity presented itself. Well, let me just say it: I freaked out somewhere around mid-March and decided we had to MOVE. We’d been living in our apartment for almost a year and a half by that point but, to be honest, it was always supposed to be temporary. In fact, the only reason we left the first apartment that Adam and I shared (where he lived before me) was because we were planning to move to L.A. sometime soon-ish and didn’t want to resign a lease. So, instead, we moved into a month-to-month place and… stayed. Whoops!

The funny way that it works in Florida (and other parts of the country that aren’t major cities) is that often buying a house is actually cheaper than renting. Sure, that’s not true for all parts of Florida or anywhere else for that matter, but it was true for us in the area that we live, in the socioeconomic status we have, and the money that we were currently putting towards rent and wanted to keep putting towards housing (sorry, L.A., but you turned out to be way too expensive).

All of this is exciting, sure. But there is one big thing that I didn’t truly consider before taking the plunge to become a homeowner and that is how much I am actually mentally ready for that leap.

Having lived my entire adult life thinking that owning a home wasn’t really something that I aspired to do, and suddenly finding myself a homeowner because it just made too much financial sense not to do it, doesn’t necessarily make you a good homeowner. I had and have been struggling with our decision… Not because it wasn’t a solid decision, I absolutely still believe it was, but because I wasn’t fully prepared for all that being a homeowner entailed.

Case in point: Currently, we have been homeowners for exactly three months and have YET to move into our new house.

That’s right, three months! And still no moving! WHAT. THE. FUCKITY. FUCK.

Thankfully, all of that is about to change. To be honest, our reasons for not moving are solid: The old owners lived there (with our permission, and by paying us moneyz) until the end of June. Then, when they got out, we had to do repairs. And, to be honest, we probably got a bit too excited and signed up for a bit too many repairs.

The house had a fine kitchen, decent bathroom, not terrible tile flooring… And yet we changed a lot of that. We ripped up the floors, redid a huge chunk of the bathroom, updated the kitchen, and who knows what more. Well, I know what more because we are currently still in the midst of finishing it all up now. Thankfully, though, it is ALMOST DONE.

This morning, when my husband wakes up, he is going to have some breakfast and then go straight to our new house. It’s basically CRUNCH TIME because we are planning to move this Saturday and so help anyone who tries to stop us.

And, let me tell you, I’ve tried to talk us out of it. But the truth of the matter is that this is the best weekend for us to move and the house is *so close* that this is just what we have to do.

Today, there’s some repairs and repainting and a million little things that have to get done, but I am fairly confident that they will get done. Thankfully, Adam will be there to kick our contractors in the butt to do it. (Thank you, Adam.) And I’ll be there a bit later in the day to do some work, too. Mainly, we’re stressing out because it has to be finished today since Friday morning our cleaning lady comes… and first thing Saturday, we’re moving!

Of course, there are probably little things that won’t get done. For instance, I have to paint our bathroom cabinets and I probably won’t have time to do that until after we move in. Our tile guy is also still finishing up the lanai and he might not be done till this weekend. And, due to a colossal fuckup that I don’t want to get into, we may have to replace one of our kitchen counters… But again, all things that can be done or finished after we move.

Right now, our floors are done. Our bathroom is basically done. Our bedrooms mostly just need some paint touch-ups. Our appliances are there and ready to be installed. Our boxes are packed, and our fridge is ready to be moved. In fact, I have almost no pots and pans left to even make lunch for today and tomorrow… So, we are MOVING.

It’s happening, and it’s scary and exiting and scary a few more times.

None of this would be happening without my parents, who have been so patient and incredibly generous during this process. Really, Adam and I could not afford all of the shit we’re doing to upgrade our house, but we’re doing it with their help and I will forever be grateful.

So, this home owning experience hasn’t started out in the best light, and I’ve been stressed up the wazoo for the past few months and especially for the past few weeks, but I’m happy we did it.

Once all is said and done, and we’ve moved in and I’ve had time to do MY thing and organize and decorate (because, let’s face it, other than picking out the pretty tile for our floors and bathroom and insisting on new kitchen appliances, home repairs are SO not my thing), things will be great.

Once we are settled in our new home, I know I’m going to love it.

But I don’t love this part of the process. The buying and the repairs and the waiting to move… It’s all been so stressful and arduous that I am not sure I can go through with it again. The house is a two bedroom, one bath, so the reality that we will outgrow it someday is real… But for now, I am just going to focus on moving this Saturday.

My stress, even as I write this, is finally starting to melt away. This whole last week has been pretty tough, and I have the donut receipts to prove it, but good too. It’s been interesting going through this as a newly married couple, and putting our teamwork to good use (again, THANK YOU, Adam, for doing so many repair-like things that I really don’t want to do). And I can’t wait for us to be living in our home, which I will make pretty and homey and joyful.

It’s taken us three months to get here, and I can’t wait… If only I can just get through these last couple of days of stress and sleepless nights.