A year ago, I was single, unemployed, homeless, broke, fat and drunk 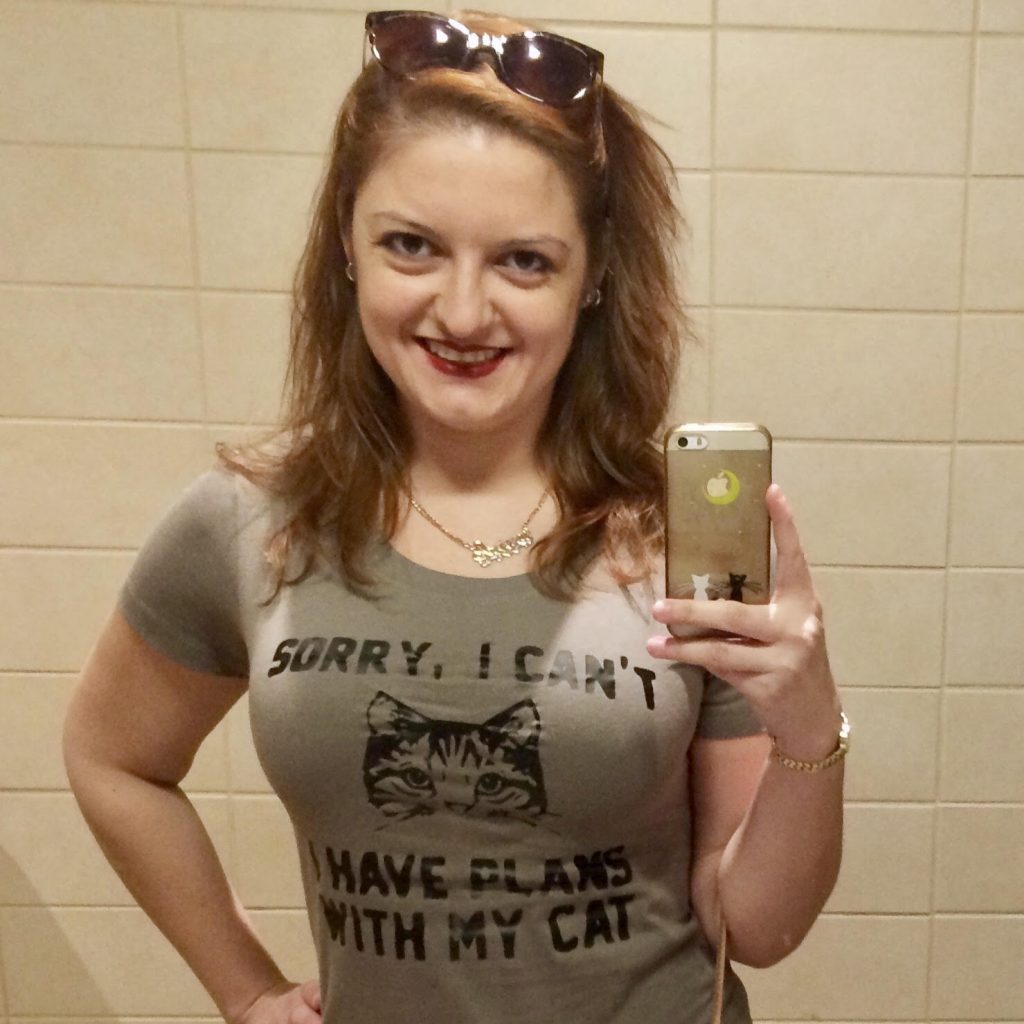 Exactly a year ago, I had just arrived in my hometown of Fort Myers, FL.

After 11 and a half happy years as a resident of New York City, I had decided to move back to Southwest Florida with my tail between my legs. Unknown to my friends at the time, I had just come out of the darkest place of my life and decided that what I needed was to restart.

So in early April 2016, I accepted my parent’s invitation to move back home for a little while and set about changing my life. I packed up my apartment, sold as much furniture as I could, had a goodbye party with the friends I loved but couldn’t yet tell the full truth to yet… and finally left the city in a van with the rest of my stuff, my faithful kitty Jack and my mom helping to drive the next 1,250 miles.

When I arrived at my parent’s house on the night of April 22nd last year, I felt completely defeated and lost. I didn’t know what the next month or six months or year would bring, and I was scared.

At the same time, however, I was ready to face up to defeat and admit that I needed to make some drastic changes in my life. As this post would suggest… When I woke up the next day, I realized (albeit half jokingly) that I was single, unemployed, homeless, broke, fat and drunk.

Okay, so maybe I’m exaggerating a little bit there.

The whole idea behind the title of this post actually started after an idea I had while working on my Map Your 30s blog on my portfolio site. While I ultimately abandoned that idea like so many of my writerly fantasies, the thoughts still persisted.

At the time, I knew that I needed to make changes and figure out some stuff in my life. I had decided to blog about those changes and that “figuring it all out” mentality with the idea that life continues to change and evolve even after turning 30, which I had done exactly a month before my big dramatic move out of the city. I categorized these changes into six different sections: relationships, career, home, money, health and confidence (my code word for mental health and recovery from alcohol addiction, which I wasn’t yet ready to talk about publicly).

Those were the categories in which I thought I needed to make some changes… and although my life might not sound quite as dramatic as the title of this post implies, I was in fact all of those things:

I was single (no long term relationship in the past six years, and the ones back then were pretty freaking crappy). I was unemployed (I had just lost a new job that I realized too late wasn’t going to work out anyway). I was homeless (living with your parents isn’t exactly being the self-sustaining adult I had known myself to be). I was broke (no real savings or any money to speak of, and what little I had was used on moving expenses). I was fat (my health had slowly deteriorated in the past few years to the point that I was 20 pounds higher than what I wished I was, 40 pounds higher than my lowest weight post-weight loss surgery, and 30 pounds higher than my goal weight). And I was drunk (in that I had just suffered from a horrible-but-brief relapse into alcoholism after my first and only stint in rehab in July/August 2015).

Basically, everything was wrong with my life a year ago.

I wasn’t happy. I knew I still loved living in New York City, but I also knew that I needed to get out of there in order to clear my head. Recovery was harder than I thought and being an adult had become increasingly more difficult. And to be honest, being single in the city sucked.

I’m not blaming the problems of my life on where I was living, but I knew at the time that it wasn’t helping. I had loving, supportive, incredible friends… but it just wasn’t enough. My health and career had stalled, I never had enough money and somehow the support system I knew I had just didn’t seem like enough. And so I went home.

Well, as hard as it is to admit… that’s probably the best decision I could have made.

At the time, I remember feeling ashamed. My friends knew I was leaving the city, but not a single one of them truly knew why until weeks later. I just wasn’t ready to come clean as I packed up my boxes and said goodbye to the only city I had chosen to call home, to the friendships I had spent my entire adult life cultivating. It was hard.

But it was also good for me.

I took the wounds that life in the city had slowly cut into me, and I healed them.

In taking myself out of the environment I thought I wanted, I discovered that I am still the person that I always was – I had just gotten a little lost somewhere along the way.

I don’t know if it was the job troubles or the drinking or the not taking care of my body or the frustrating dating life or the living alone or the feeling constantly penniless for 12 years, but I finally broke. But in breaking and admitting that something in me shattered, I was slowly able to put myself back together again.

Shortly after moving back to Florida, I unexpectedly met the love of my life.

I know how ridiculous that might sound, trust me. The “love of my life” is not a phrase I ever thought I would utter. But in meeting my partner Adam, I realized that I had never known love before. He was the first – and very vital piece – of putting my pieces back together.

Afterwards, I got my old job back. Then I moved in with him, just as we both started to eat much healthier and started to take care of my finances again. I rebuilt friendships new and old, reconnected with those I left behind in NYC and those I have missed here in FL since I originally moved away.

And most of all, I haven’t had a single drink since last April.

The life I left behind slowly faded away into this new life I created for myself. I realized that I wasn’t all gone and that taking some time to take care of my mental health was nothing to be ashamed of. I know that I am incredibly lucky to have parents who were behind me when I needed them, and even luckier to have found someone who loves me and supports me (and still wants to see me naked) despite all my horror stories of the past.

Now, a year later, I almost can’t believe the changes I have seen in my life since leaving New York as a single, unemployed, homeless, broke, fat and drunk mess of a person.

I’m now in a loving relationship with a man that shows me more support than I could ever possibly deserve, happier than ever working as a full-time freelance writer and editor, carefully decorating a beautiful home that I share with my love and our two fur babies, slowly paying off all of our debt and saving money for the first time in my life, back to a really happy weight thanks to my mostly-vegetarian diet and going to proudly celebrate two years in recovery this summer (and just celebrated a year since my last relapse).

I’ve rebuilt my life in completely unexpected ways, and it wouldn’t have been possible if I didn’t admit to myself back then that I was lost.

When I set out on this journey a year ago, I didn’t know what the year would bring. I didn’t know how lost I was and, to be honest, I hadn’t yet realized just how dark of a place I was in until I was fully out of it. But that’s what happens sometimes, I think. Insert joke about hindsight being 20/20 here…

What’s true now is that I finally feel like I have my life back together. I’ve taken all of those little pieces that slowly crumbled around me without me noticing and I collected them all, meticulously glued them back together with my own brand of crazy glue, and just kept on going.

It’s incredible how I feel today in comparison to this day a year ago. I wouldn’t even know how to describe it except to say that my life is 1000x better than I ever could have imagined.

I know that a lot of that is in part because I found someone who is there for me all the time, no matter what, and who proudly calls himself my number one fan. Gotta love that!

But most of it is because of me, and because of the strides I made to pull myself out of that dark place I was in.

The smiling picture you saw at the beginning of this post was a mask… I was smiling to keep from crying as I took that picture in a restroom somewhere along the drive from NYC to FL. But now my smile is bigger than ever, and it’s genuine.

What a difference a year makes, huh?

Author: Irina Gonzalez
Filed Under: Blog, Career, Health, Home, Money, Relationships, Self-Care
Tags: Adam, recovery
When did I become that person who calls her car “my baby”?
Here’s what I learned about partying sober since I gave up alcohol