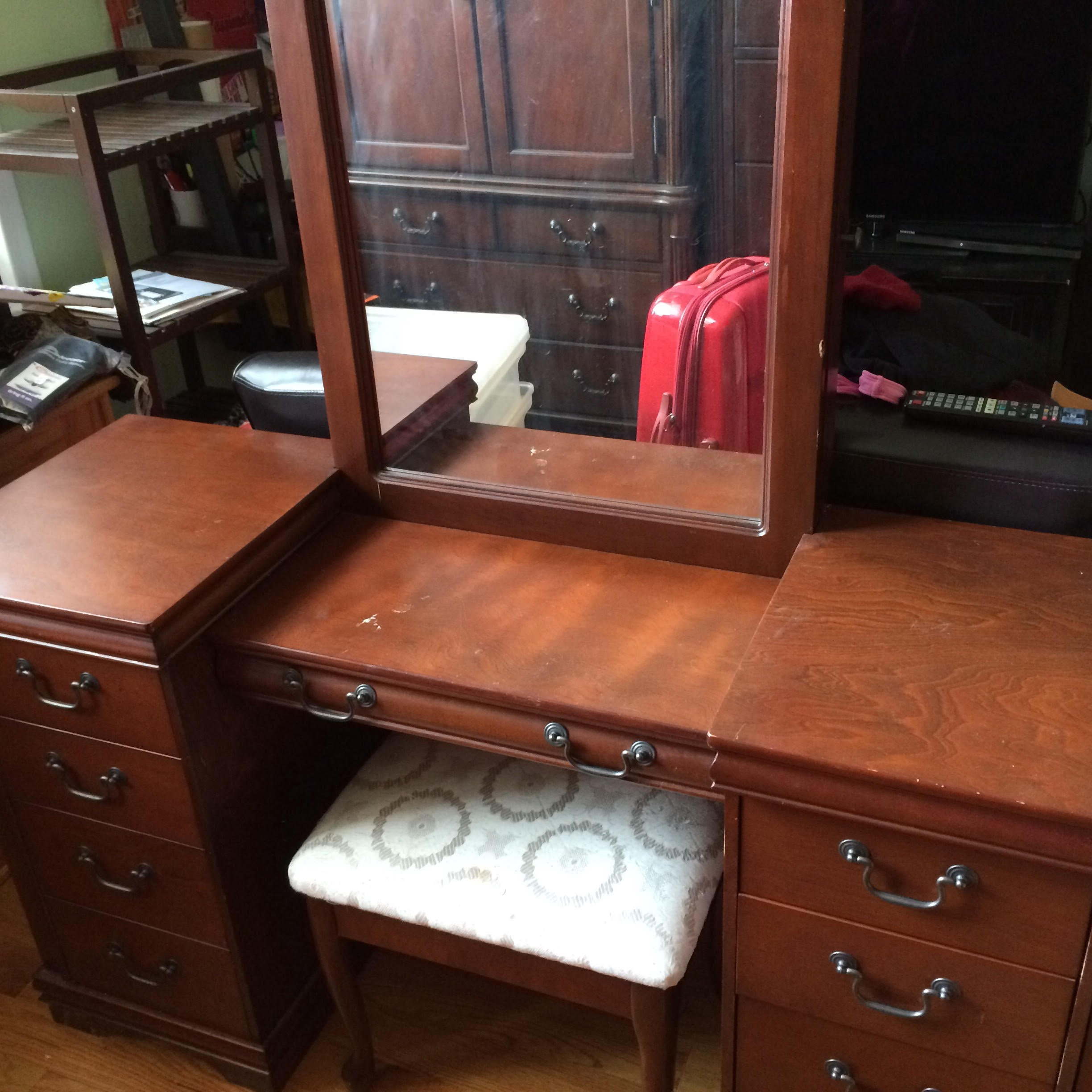 One of the weirdest parts of moving out of the city I’ve called home for the past 12 years is actually getting rid of all of the furniture things that I collected over the past several years.

For me, anyway, that was absolutely the weirdest.

To be honest, when I decided to leave New York City this past April, I was filled with fear, with hope, with a renewed sense of life and with a lot of doubts about the choice I was making. And the original choice didn’t exactly work out as I planned, but I ended up exactly where I needed to end up for reasons even beyond my understanding – and I’m certainly very grateful for all of that.

But as I was entering into the transition of “hey, look, I’m MOVING!”, I wasn’t fully prepared for what that actually meant.

You see, I never really planned to move out of New York. I had wanted to live there ever since I could remember and it was the city where I felt most at home. But when opportunity knocked, I decided to take the chance and see what happens.

And then I was faced with the reality of actually doing it.

I’m a bit of a conundrum as a person, I think. Sometimes I feel very sentimental towards the things I own, and other times I am really quick to just want to get rid of it all. That’s why, when it came to much of the furniture that I had owned for the past 8 years or so, I was feeling a whole mix of emotions that I really didn’t expect.

On the one hand, moving over 1,000 miles away didn’t exactly warrant bringing all of that stuff with me. On the other hand, the furniture was still good and sturdy, and had served me well.

But I knew I had to get rid of it. So, on a fateful day in late March, I took as nice of pictures as I could of my bed, my armoire, my dresser, my vanity table, my lingerie chest, my matching bookcases, my desk, my couch, my kitchen island, my dining table and my TV stand.

So many things! So many memories!

The bed frame, armoire and dresser were all purchased in early 2008. It was my first real big girl act as an adult, and I was proud to have an oh-so-pretty matching set. The armoire that held a small TV for many years, the dresser that had once become The Place Where The (now ex) Boyfriend Kept His Things, the bed frame that I always thought looked so pretty… It all had to be sold and sold ASAP.

I knew it was the right thing to do, especially as that particular matching furniture set had also given me plenty of headaches over the years. The pieces were sturdy but heavy AF, and moving with them every year became a pain that I absolutely hated reliving.

The couch and the desk and the bookcases and the kitchen things didn’t pose as much of an emotional attachment, and I know that’s largely in part because they had only recently come into my life.

Still, the bookcases had made me very happy as they perfectly held all of my colorful cookbooks and dreams of becoming a Food Network star one day. The desk held all of my important things and documents and, although I rarely worked sitting directly at it, still held a very important place in my home and in my heart.

And then came the vanity table and lingerie chest. Purchased not too long after my initial furniture buy eight years ago, these were prized pieces that I had come to love more than any person should probably ever love a piece of furniture. But something about these two pieces just made me smile.

Maybe it was the silly girly girl in me or maybe it was… No, wait, that was probably it. The vanity table, which was big and bulky and WAY too much for a New York City apartment, was still something that I wanted year in and year out. Whenever a new apartment move came up, I held on to it.

The way it stood there with two large storage units on either side of me, a big mirror to look into, a cute little bench to sit on – I loved it all. Even as I tried to downsize the amount of makeup and beauty trinkets I had, I always found a way to fill its drawers with plenty of lovely little things.

Getting rid of that was probably one of the hardest things I had to do in terms of my move. Sure, all of the furniture held some value in one way or another, but it was the vanity table that I had loved the most.

Having never considered myself a particularly sentimental person when it came to pieces of furniture, I was shocked by my reaction as Craigslist people came to pick up one piece, then another, and another, until all of it was gone out of my apartment.

And maybe the truth is that the power of that word in relation to my furniture and my life in NYC is what I feared the most.

If I could get rid of my New York apartment furniture so easily, could New York itself get rid of me just as easily?

Friends assured me that this would never happen. That New York will always be here for me, should I want to come back in a year or two or 10. And I knew they were right – I know that because thousands of people move to the city every year.

I know because I was one of them back on August 28, 2004, when my parents and I drove from Florida to New York to drop me off at NYU. I was a scared little freshman who knew nothing about life in the big city and, let me tell you, had NO idea how to dress or how to act, but I found my footing there eventually. I found my sense of style, I found my career, I found my group of friends, and I just found myself in the city that never sleeps.

But it’s not because the city didn’t love me or because I didn’t love the city. Even as I look around my current apartment, so lacking in all of the things that used to make up my home, I’m filled with a renewed sense of hope – exactly what I was looking for in making this transition.

Just as my beloved former vanity table helped to brighten up my house every single day, I know that I’ll find a new furniture item to do the same. I’m not yet settled in where I now live in Southwest Florida, but I’m getting there.

It’s not the transition I thought I would make, and it’s definitely not where I thought I would be six months ago. But getting rid of those things, strange as it still kind of feels, was also liberating. Giving up my furniture helped me to let go of my life in New York.

With a vanity table or not, I’m excited to turn the pages.

Author: Irina Gonzalez
Filed Under: Money
Tags: moving, NYC
I’m about to turn 30…
Why carrying cash is the worst thing you can ask a Millennial to do