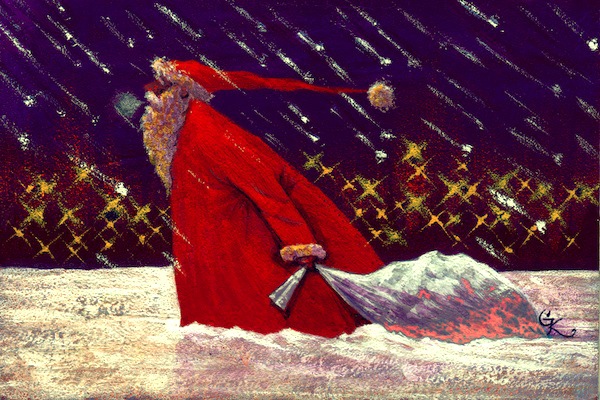 It was my last New Year’s Eve in Russia when I realized that Santa Claus was not real.

I remember it clearly: The snow was coming down, and coming down hard. In Russia at the time (I don’t know about now), we didn’t celebrate Christmas because the U.S.S.R., as a communist state, was officially atheist. And while the state had dissolved by December 1993, the traditions remained.

We celebrated the holidays by celebrating New Year’s, but with all of the decorations of Christmas. There was a tree, there were twinkling lights, there was lots of food and family, and there was, for us little ones, Santa Claus bringing presents at midnight.

I remember December 31, 1993 so clearly because of one reason: My grandfather coming in from the cold, covered in snow.

A lifetime smoker, he had made the usual excuse to go outside, despite the fact that the snow was not stopping anytime soon. Mom wouldn’t let me outside.

But then, just as dedushka came in after his nightly smoke, the snow started to let up just a little bit and he let out one simple phrase: “I think I saw something outside.”

Immediately intrigued – and with the clear indication that this “something” may indeed have been Ded Moroz (an old slavic term for “Grandfather Frost”, aka our version of Father Christmas or der Weihnachtsmann) – me and my little brother rushed to the narrow but tall window in my grandparent’s house entry hallway. It was the only place where we could look and clearly see the entire path from two-story house to the green fence and gate that stood at the end of the walkway.

“There’s something there!” I shouted.

And indeed, there was. After mom insisted on dressing her two impatient children in our full winter outfits, the whole family rushed to see what Santa Claus had brought us.

I honestly don’t remember what I got that year. All I remember is that, at the end of that walkway, there was a big plastic toy train for my little brother, and it was filled with other toys for the both of us. Excited, we kneeled down to play right away – but mom wasn’t having it.

Because of the cold and snow, we were dragged kicking and screaming back to the warming comfort of the house. The toys came with us, of course.

I don’t remember how much time went by in between dedushka coming back into the house to tell us Santa Claus had come or us being back after collecting our presents, but I do remember the yowling coming out of my baby brother’s mouth for the next hour.

It was clear what he wanted: He wanted to go back outside and play with his train.

As I undressed in the kitchen and got ready to play with my own toys, all Noly wanted was to go outside. Over and over again, he tried to put his hat back on after mom took it off, indicating that it was now time to be indoors. But my stubborn little 2-year-old brother just kept trying.

Of course, being a child, he couldn’t quite master how to put his hat back on, and so he cried and begged for help so that he could go play with his train outside.

Meanwhile, I watched. I watched as my baby brother tried to go back to the snow to enjoy his new toy, and I watched suspiciously as everyone gathered around us kids and our presents.

Being a curious and perhaps a precocious child, I found it incredibly suspicious that my grandfather happened to be outside just before Santa came to drop off our presents. Why hadn’t he stood under the roof of the patio to smoke, but instead his coat was wet from the snow?

That’s when, for the first time, I realized that Santa wasn’t real. That Ded Moroz was actually my grandfather, who had snuck out of the house and placed all of our gifts under the glowing lantern at the end of the walkway. There was simply no other explanation for it.

In my head, I questioned the situation and simply didn’t know what else could have been possible. It was clear.

Somehow, at the same time that I knew my grandfather had really been the one to deliver our New Year’s presents that year, I knew that it must have been this way every other year too. I knew that this must happen in every family, really… That there was no magical being that brought us something from the sky, but rather our families.

And yet, as I looked at my own family happily celebrating the start of the new year – the year that would soon take my parents, brother and I to America – I was happy.

Although I didn’t yet know what the next year’s changes would bring, being with my family and seeing the love that surrounded us – including my poor dedushka suffering in the cold and snow to surprise his grandkids – made me smile.

As my baby brother tried (and failed) again to put on his hat, I settled happily back in the living room near the glistening tree. It might be one of the last times that I saw snow for many, many years but, thankfully, it was not the last time that I saw love and wonder… And maybe even a little “Christmas” magic, too.