Am I Latina Enough? (Essay featured in Latina magazine’s May 2014 issue)

In May 2014, my essay “Am I Latina Enough?” was featured in the pages of Latina magazine. It was an honor to write this piece, which is very near and dear to my heart.

Below is an image of the story, followed by the full text in case that’s easier to read: 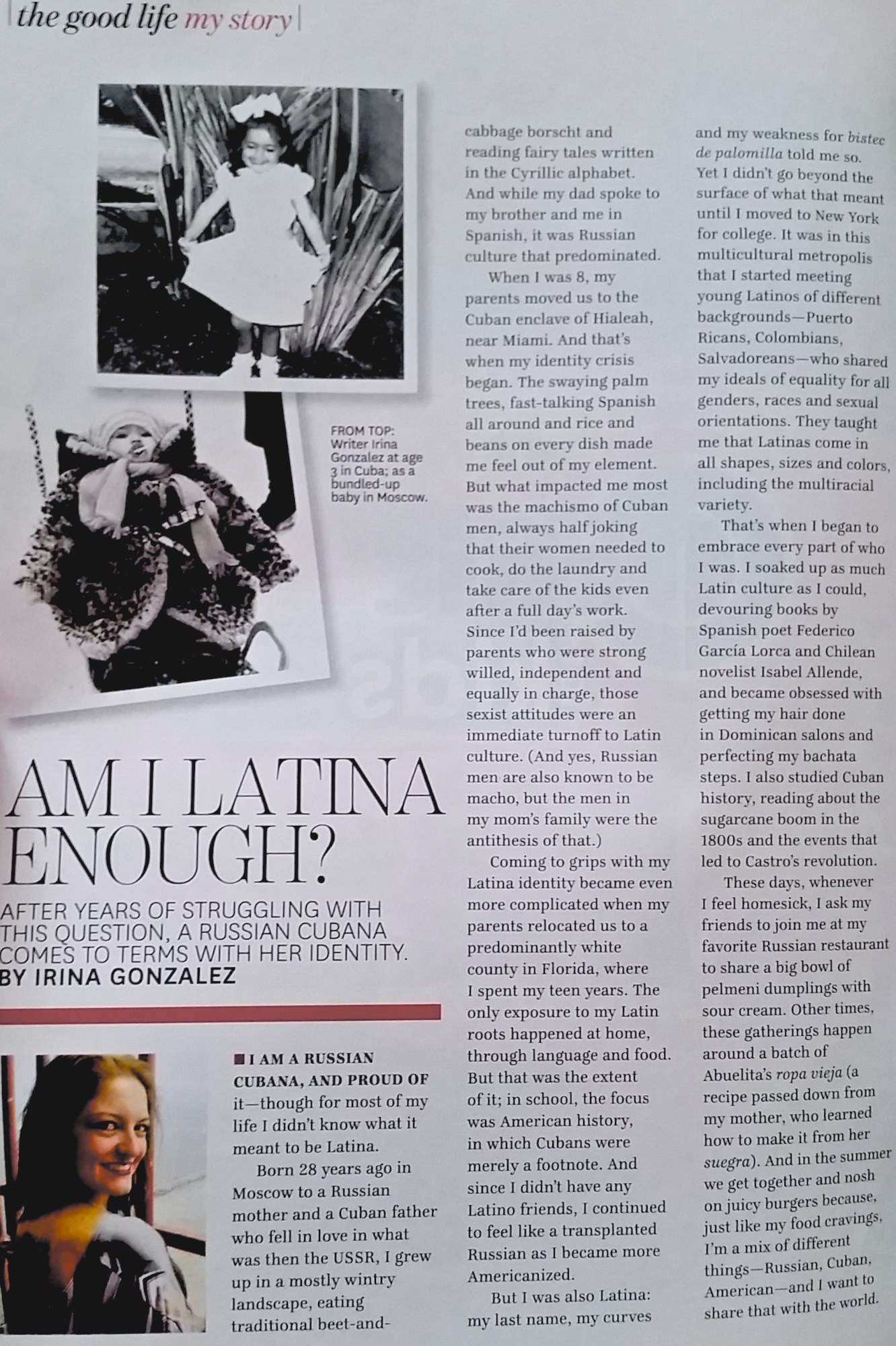 [Images FROM TOP: Writer Irina Gonzalez at age 3 in Cuba; as a bundled-up baby in Moscow.]

Am I Latina Enough?

After years of struggling with this question, a Russian Cubana comes to terms with her identity.

I am a Russian Cubana, and proud of it—though most of my life I didn’t know what it meant to be Latina.

Born 28 years ago in Moscow to a Russian mother and Cuban father who fell in love in what was then the USSR, I grew up in a mostly wintry landscape, eating traditional beet-and-cabbage borscht and reading fairy tales written in the Cyrillic alphabet. And while my dad spoke to my brother and me in Spanish, it was Russian culture that predominated.

When I was 8, my parents moved us to the Cuban enclave of Hialeah, near Miami. And that’s when my identity crisis began. The swaying palm trees, the fast-talking Spanish all around and rice and beans on every dish made me feel out of my element. But what impacted me most was the machismo of Cuban men, always half joking that their women needed to cook, do the laundry and take care of the kids even after a full day’s work. Since I’d been raised by parents who were strong willed, independent and equally in charge, those sexist attitudes were an immediate turnoff to Latin culture. (And yes, Russian men are also known to be macho, but the men in my mom’s family were the antithesis to that.)

Coming to grips with my Latina identity became even more complicated when my parents relocated us to a predominantly white county in Florida, where I spent my teen years. The only exposure to my Latin roots happened at home, through language and food. But that was the extent of it; in school, the focus was American history, in which Cubans were merely a footnote. And since I didn’t have any Latino friends, I continued to feel like a transplanted Russian as I became more Americanized.

But I was also Latina: my last name, my curves and my weakness for bistec de palomilla told me so. Yet I didn’t go beyond the surface of what that meant until I moved to New York for college. It was in this multicultural metropolis that I started meeting young Latinos of different backgrounds—Puerto Ricans, Colombians, Salvadoreans—who shared my ideals of equality for all genders, races and sexual orientations. They taught me that Latinas come in all shapes, sizes and colors, including the multiracial variety.

That’s when I began to embrace every part of who I was. I soaked up as much Latin culture as I could, devouring books by Spanish poet Federico García Lorca and Chilean author Isabel Allende, and became obsessed with getting my hair done in a Dominican salons and perfecting my bachata steps. I also studied Cuban history, reading about the sugarcane boom in the 1800s and the events that led to Castro’s revolution.

These days, whenever I feel homesick, I ask my friends to join me at my favorite Russian restaurant to share a big bowl of pelmenyi dumplings with sour cream. Other times, those gatherings happen around a batch of abuelita’s ropa vieja (a recipe passed down from my mother, who learned how to make it from her suegra). And in the summer we get together and nosh on juicy burgers because, just like my food cravings, I’m a mix of different things—Russian, Cuban, American—and I want to share that with the world.